To smooth your journey through sato.fi we use cookies. By continuing to use this site you agree that cookies will be stored in your browser. You can delete the cookies any time through your browser settings. Read more about cookies and sato.fi information security here » 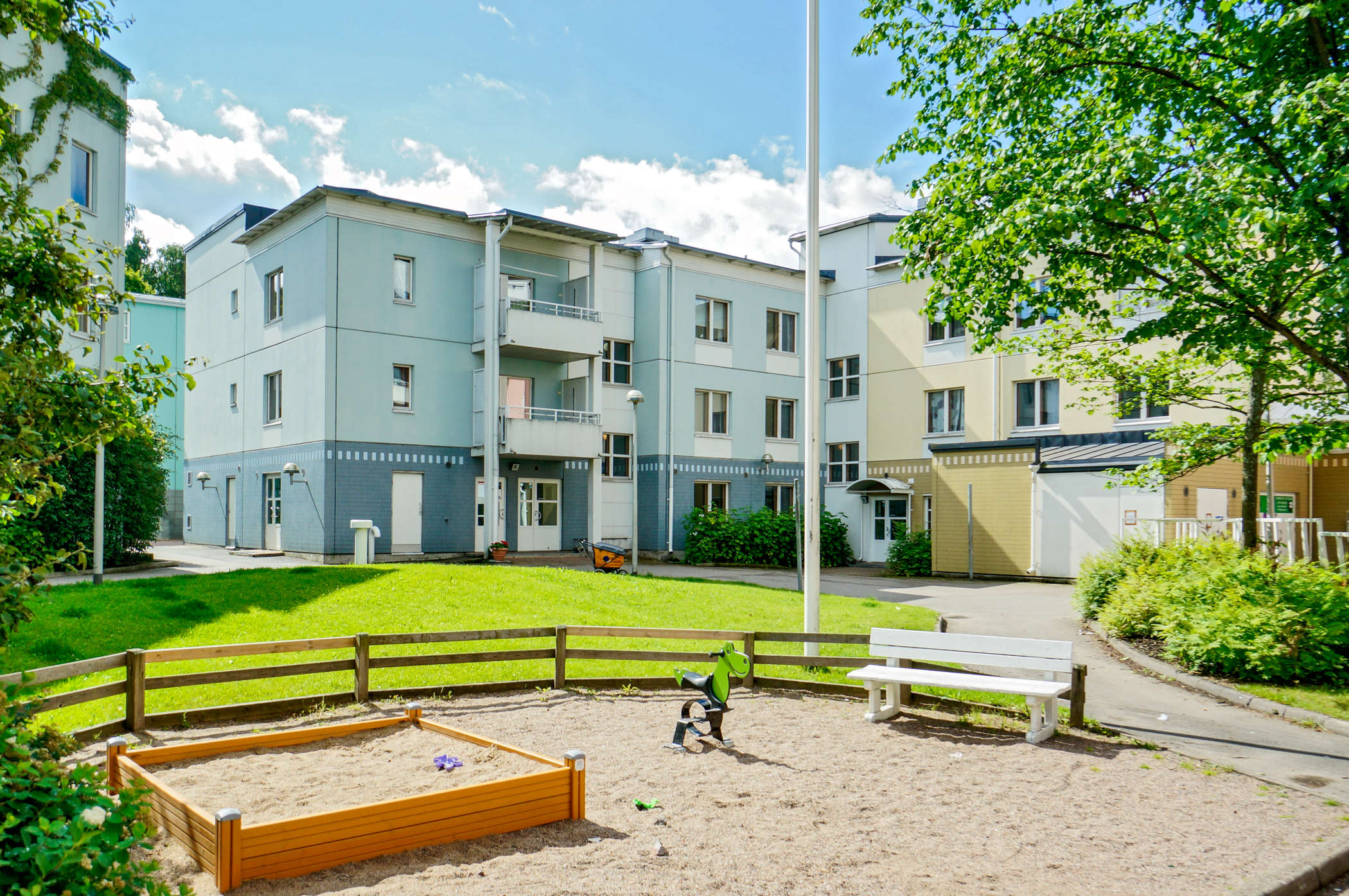 In Pikku Huopalahti you can immerse yourself in chess, treat your tastebuds to a tikka masala, or take a break at the community theatre. The colourful architecture of this suburb with a city feel will impress and inspire you to explore.

Located in Western Helsinki, the best things about Pikku Huopalahti are the urban scenery and the convenient location as well as its closeness to nature – the routes of major running events go along the seaside street and from the Central Park you could ski all the way up to areas outside Helsinki. Bordering on the Mannerheimintie and Paciuksenkatu streets, this district is a colourful antidote to the grey concrete buildings of the 1970s. Transport links are excellent thanks to the nearby main arteries, and you can also reach both sides of the area by tram: number 4 stops on the Meilahti side and number 10 on the Mannerheimintie side.

See our seven tips to get to know Pikku Huopalahti.

1. The terraced building block is the local landmark

Pikku Huopalahti is a mixed and unique area in terms of architecture and features plenty of colourful buildings. To crown it all, there is Terassitalo, the terraced building block that has been referred to as the most unusual building in Helsinki.

Designed by architect Reijo Jallinoja, this apartment building was completed in 1994 and towers above the entire district as a landmark at the corner of Mannerheimintie and Korppaanmäentie.

2. Art at the seafront

The pedestrian routes around Tilkanniitty by the sea are very pleasant for walks. Here is also where you can feast your eyes on the art park designed by artist Sanna Karlsson-Sutinen. This sculpture park was created on her initiative and receives more works of art every year. If you are up for a longer walk, Pikku Huopalahti is only a couple of kilometres from the lovely recreational areas of the Central Park and Seurasaari island.

The local voluntary fire brigade is based in the neighbouring district of Haaga. Founded in 1904, the brigade ensures its preparedness for emergencies by making plans of action and conducting exercises. Safety training is available from the voluntary fire brigade for enterprises as well as housing companies, and the brigade also serves as a reserve unit for the City Rescue Department, ready for response at half an hour’s notice.

It smells wonderful the moment you open the door to Restaurant Gurans. The aroma is a mixture of tikka masala, garlic, naan bread baked in the restaurant’s own tandoori oven plus much more. Gurans serves traditional Nepalese food, so it is no wonder the place is often absolutely packed at lunchtime. Nepalese food is often strongly seasoned and typical ingredients include herbs and ginger.

Dishes you should definitely taste at Gurans include palak paneer, a very typical Nepalese dish of paneer – a fresh cheese – in a spinach and ginger sauce.

5. Laughter yoga at the community centre

When the laughter yogis start their session in the old Tapanila station building stress hormone levels are reduced and replaced by feelgood hormones. Laughing out loud also makes the air circulate better in your lungs. Laughter improves your health!

The community centre can be hired for residents’ recreational activities. There is plenty to choose from, including laughter yoga.

6. Take a break from everyday life at the community theatre

At the Pikku Huopalahti community theatre locals with day jobs in various fields get together to write scripts and act with a director. Acting is an efficient way of getting your mind off everyday life.

The season starts in the autumn with improvisation exercises that will provide the foundation for the spring season’s play. To join, you will need to have an open mind and be committed to practice. Everyone can learn how to act if they want to. It is all about attitude.

SATO also has large rental homes suitable for families with children in Pikku Huopalahti. Surrounded by small streams and allotment garden plots, the Viiri playground is popular and easily becomes the favourite place for the entire family to hang out. The purpose of the playground is to provide a safe and pleasant place for children and adults to spend time in, and it can also be hired for family celebrations.